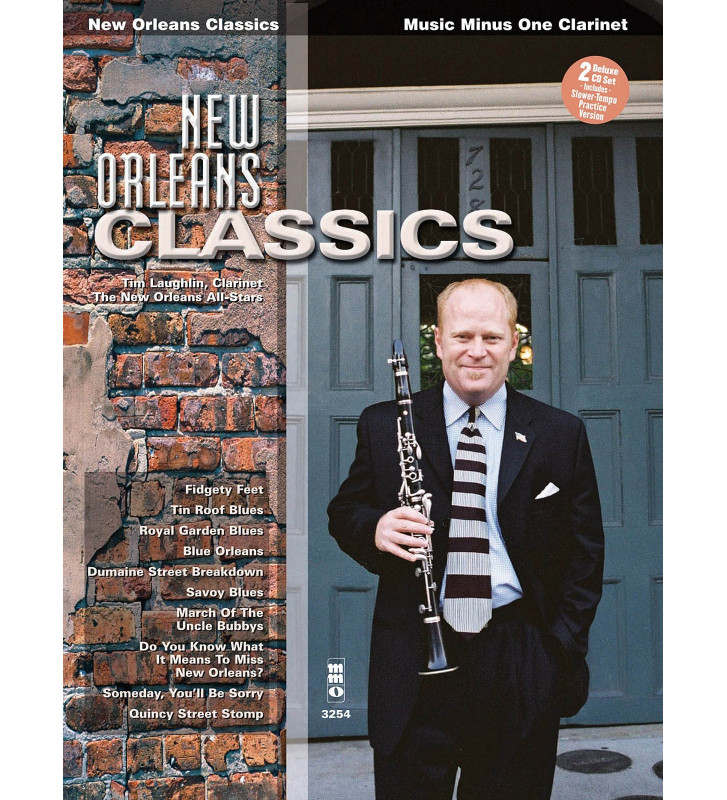 New Orleans Classics
Music Minus One

Performed by Tim Laughlin, clarinet Accompaniment: Tim Laughlin's New Orleans All-Stars. Many people consider New Orleans the birthplace of jazz. After all Louis Armstrong was born and played there, as well as Joseph King Oliver, the Dodds Brothers, Sidney Bechet and a roster of players to fill not one but many all-star bands. Louis Prima was a child of the Crescent City as is Harry Connick and Wynton Marsalis. The whole Marsalis clan was raised there, and are all acknowledged jazz masters, so its reputation as the seminal jazz town has long been acknowledged. We assembled a band of New Orleans' best players for our times, veterans all of many street parades and steamboat gigs, and asked them to put together a typical program of New Orleans Classics. Under the direction of Tim Laughlin, clarinetist supreme, and led by Connie Jones, Jr., one of the great hornmen of this city which boasts so many great players, they put together an album of must-hear, must-have songs that every traditional jazz player cherishes. Hear them now in these perfect renditions. Then join the band on your own instrument, be it clarinet, trumpet, trombone, tenor, piano, bass or drums as they swing through the French Quarter of New Orleans. Includes newly engraved solo charts printed on acid-free, ivory paper; and two compact discs featuring complete versions of each tune, plus a recording of the accompaniments minus the soloist. Also includes slow-tempo versions of most up-tempo pieces for practice purposes.